If you haven’t read the first two parts, you can go back and read them. This is part three of six.

To be 100% honest here…  I have written and re-written todays and tomorrow’s posts no less than 10 times. I can’t get what I want to say right… but decided to just go with what I have. So, if it doesn’t make sense, deal with it  =)

There is always danger in leaving a place to go, to what seems like, a world away. However, moving back to where you are supposed to be “home” is hard! You just left a place that changed you, it captured your heart. You are now weaved with the beauty, hardship and wonder of the place you just left. There is no step by step guide… no re-entry for dummies.

When you are heading to the mission field you hear about culture shock, and I did feel it! When I first got there, I couldn’t speak, read or write the language. My time was spent very differently than what I had expected (not really in a bad way).  I had expectations that weren’t met… and really cool things that happened that I wasn’t expecting! There were days when I said, “How did a girl from Nebraska get here?”

But, I was also able to embrace the culture. The culture and the people embraced me too. I spent lots of time with people cooking, eating, laughing, hearing stories, and witnessing God do things in their lives. I was often humbled, sometimes my heart was broken by things I saw and experienced, felt the privilege of doing what I was able to do, sometimes I felt helpless or guilty or thankful. It became home.

The re-entry (or reverse) culture shock is harder.

When you come back to your passport country, you are expected (and you expect) to feel like you are home… to just jump in, understand everything and feel comfortable. Those expectations are hard.
Guess what… you have changed, your friends have changed, your church has changed, and you are so tired.

Even when you are going through security after returning back to the States, they typically say ,”Welcome Home!”. The years before, they would say that and it was a delight to hear it. But, that day I was coming back for good, it was different, it was sad to hear.

In Mexico, I could seamlessly go into a market and get all the groceries that I need. But, the first time I went to Target, when I got to the States, I almost cried because I couldn’t find the coffee filters. I tend to see the abundance of everything in the US… sometimes I judge it and sometimes I fall into it. And now I find myself saying, “How did this Mexican girl end up here?”

My transition, from most people’s standpoint, should be positive. I heard it over and over, “Isn’t it nice to finally be home?” (by the way, I don’t recommend saying that to someone coming back… they will likely just smile… but inside they are dying).

Even for me, in a lot of ways, it was positive! I wasn’t leaving the field because ministries were dying, a moral failure, or a medical issue. It was the opposite. The ministries and church were thriving! I left because God opened a door and was very clear with me. But I still have felt the death of a dream. The death of a life and the leaving a family that I fully expected to spend the rest of my life serving.

To be continued tomorrow… 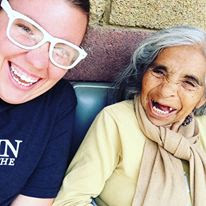